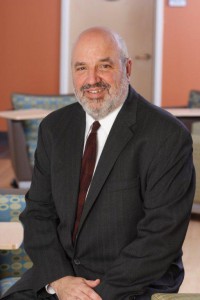 Carlos is a very low-income gay man who came to the United States 30 years ago. He discovered his HIV+ status in 1993. “Carlos had experienced a lot of abuse at the hands of the police in his native El Salvador because he was assumed to be gay,” said Jim. “He’d also been abused by his siblings and at school, and had been discriminated against at work as well. He was afraid of being deported back to El Salvador, where he’d be persecuted again and not get the medical treatment he needed.”

Carlos’ case was a complicated one and Jim worked nearly 100 hours over a period of two years to resolve it. Carlos had come to the attention of immigration officials when he was arrested on suspicion of shoplifting. Because he didn’t have legal immigration status, he was later taken into custody by ICE, and then released with a monitoring anklet while his deportation case proceeded. “Carlos did not have a strong asylum case after all those years of being in this country,” said Jim. “The shoplifting charge was another strike against him. Although I’ve had very good success in the immigration cases I’ve done for ALRP, I wasn’t sure we could win this one. But Carlos really needed representation and he had a very compelling story.”

Carlos’s shoplifting charge was sent to diversion due to extenuating circumstances and his previously clean criminal record. And while he was most likely not going to be granted asylum, Carlos was granted withholding of removal, so he’s free to stay in the United States for as long as he wants.

“He was thrilled to be able to stay where he can get treatment and where he’s lived for 30 years,” said Jim. “The risks to him if we lost were so huge. He went immediately from the immigration hearing to the courthouse to get the monitoring anklet removed. He’d been wearing it for two years. He was so stressed the entire time.”

In his legal practice, Jim is an attorney at Goldfarb & Lipman, where he does civil litigation. He has served on the ALRP Panel and the Bar Association Panel since 1992, and many times has accepted immigration cases that have daunted other attorneys. He joined the Panel out of a need to give back to the community.

“We’re all immigrants,” he said. “My grandparents were immigrants. This felt like a good niche for me to give back. These are people who really need help. Some of my clients cry during their interviews when they have to relate what they’ve experienced and realize they might not be able to stay in the U.S., so it’s really gratifying when we win.”