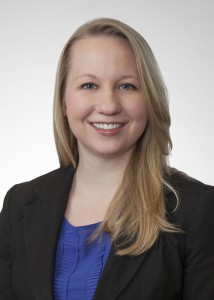 “From the very moment I heard the details of Gabriel’s story, I knew it was going to be a tough case,” said Katherine Larkin-Wong, an Associate in the Litigation Department of Latham & Watkins. “But working with Gabriel and ALRP on this case was an incredible opportunity to really help someone.”

Gabriel had contracted HIV when he was sexually assaulted by a police officer in his native country. He left behind a promising science career and fled to the United States, where he was referred to ALRP for help with his asylum case. “He had only been in the United States for six months when I met him,” said Katherine. “I really wanted to take his case. Knowing that he was well-educated and had a good career, I wondered why he’d had to flee. I warned him that for an asylum claim, the things that were hardest in his life were the things we needed to talk about because they would make his case stronger. Over the course of three or four interviews, his story came out. The assault was a terrible thing that happened to him, but it was an extremely persuasive fact to show why he couldn’t return to his country.”

Because of the strength of Gabriel’s case and because he had sought asylum so soon after entering the United States on a visitor visa, Katherine was able to file an affirmative application for him in 2013. “At our last meeting before I filed the application, Gabriel told me, ‘This story has a happy ending—I met a man,’” remembered Katherine. “He had met and fallen in love with Darrell, and as soon as Windsor came down, they got married. At our firm we considered whether to change his asylum case—there was talk that the administration would amend the regulations and grant same-sex couples immigration benefits consistent with straight couples, but since we didn’t know for sure, we proceeded with the case as we’d originally planned.”

Katherine had wanted to be a lawyer since she was a child. After she earned her bachelor’s degree at Claremont McKenna College, she worked as a paralegal in order to learn more about the field of law before earning her law degree at Northwestern University School of Law in 2011. As a paralegal she worked with the Verizon antitrust practice group, sparking an enduring interest in the subject. Her white collar practice grew out of her antitrust work, and has led to work in areas such as internal investigations and money laundering. “I get to do both the criminal and civil sides,” she said. “I’m lucky to sit at an interesting place in the field.”

Katherine’s pro bono work at Latham & Watkins brings a different type of satisfaction. “My pro bono work is about social justice,” she said, “so I look for cases where I can make real changes for people. ALRP provides an important connection between law firms and clients who are uniquely disadvantaged by HIV/AIDS. Without ALRP I probably never would have met Gabriel.”

Gabriel had to wait over 18 months, but eventually won asylum. “I think that it was the best day of my legal career when I got to call him and say his asylum request had been approved,” Katherine said. “Now he’s on a path to citizenship, he can work in his field again, and he can move on from a terrible time in his life. I’m extremely proud of the fact that I was able to help him.”