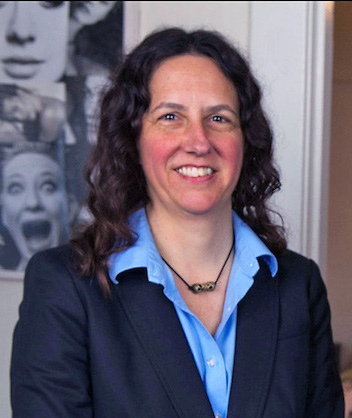 Despite its imperfections, San Francisco is often a safe refuge for HIV+ and LGBT people who have experienced extreme persecution in their countries of origin. ALRP Panel attorney Cara Jobson is one of the attorneys who help refugees remain lawfully in the Bay Area. ALRP clients have told us horrific stories of abuse, gang violence, and even sexual assault resulting from the disclosure of their sexual orientations and gender identities. Others have shared the difficulty of accessing HIV/AIDS-specific medications in countries with resource-poor or developing health systems. Maria, one of our immigration clients, is no exception to this unfortunate rule. A transgender woman born in Mexico, Maria came to the U.S. over 25 years ago with hopes of living a more open and authentic life than what was possible in Mexico. With the help of several volunteer attorneys, Maria has walked the long road from undocumented individual to long term permanent resident. Now ALRP Panel attorney Cara Jobson is working hard to assist Maria in taking the last step: citizenship.

Cara Jobson, one half of the San Francisco firm Wiley & Jobson, has had a remarkably long commitment to the rights of LGBT immigrants, particularly in the area of asylum. Handling dozens of asylum cases a year and being heavily involved with LGBT legal organizations such as the National Center for Lesbian Rights and Pride Law Fund, Cara’s expertise makes her an invaluable asset to ALRP and our clients. In the eight years that Cara has been on our Panel, she has done truly exceptional work for ALRP. Read more about that work in the interview below.

ALRP: What inspired you to become an immigration attorney?
Cara: I worked as a legal assistant in an immigration law office before I’d ever considered law school.  Defending people facing deportation was so rewarding that I decided to go to law school and have been practicing immigration law ever since.   It is a privilege to be able to help people in any capacity and I find it very rewarding to be able to be a part of making a concrete difference in people’s lives.

ALRP: How did you find the AIDS Legal Referral Panel?
Cara: I found ALRP through other Bay Area non-profits.  ALRP is such an integral part of the support network for immigrants, particularly LGBT immigrants. I can’t recall a time that support network hasn’t been important to clients’ lives.

ALRP: You have led several continuing education trainings for ALRP and similar organizations. What have you learned from being an MCLE presenter – how has it influenced your work in the office?
Cara: It is always an inspiration to see the volunteer attorneys and to be a part of giving them skills and information that is going to be turned around and used to help the immigrant community.

A lot of my involvement with ALRP has also been mentoring other attorneys, which has been very rewarding. Through mentoring and taking on pro bono clients I see a broad spectrum of immigration cases, including asylum based on HIV status, gender identity, and sexual orientation. The range of cases really reflects the needs in the community.

ALRP: We referred an immigration client named Maria to you in the end of 2014. What work have you done so far and what are the next steps?
Cara: I was recently brought into the case to help with naturalization which will really be the culmination of a long struggle for her as she has been in the U.S. for over 25 years.  Other volunteer attorneys had helped her get asylum based on her gender identity. She’s faced a lot of challenges including long-time undocumented status, serious mental health issues, medical problems, and financial hardship.  We sought and were granted a fee waiver and are seeking a waiver of the English language requirement based on a doctor’s recommendation.  Her citizenship interview is coming up soon and we are hopeful for a positive result.

ALRP: How do you see new developments in immigration law affecting ALRP clients?
Cara: Obama’s November 20, 2014 annuncement regarding executive action is a positive step forward that can make a huge difference in the lives of people who came here as children or who have children in the U.S.  However, the executive action is temporary and it is limited in that it leaves out long term residents who don’t have children.  We continue to need more permanent immigration reform from Congress that will be more inclusive.

Cara received her J.D. from UC Berkeley and her B.A. in Latin American Studies from UC Santa Cruz. She also attended the Universidad Michoacana de San Nicolas de Hidalgo in the state of Michoacan, Mexico, where she studied Mexican history and literature. Her other pro bono activities include serving as a Mentor Attorney at the Pro-Bono Asylum Program of the Lawyers Committee for Civil Rights and a Volunteer Attorney at La Raza Centro Legal Immigration Clinic. Learn more about Cara’s work or get in touch by visiting www.wileyjobson.com.

PREPARED: “I have confidence that I am not facing “the law” alone or without representation. I’d be lost without your guidance and expertise.”