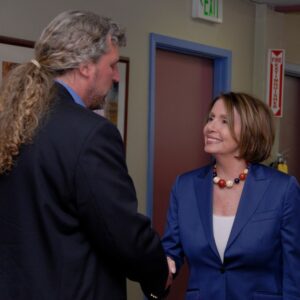 Earlier this year, a terminally ill client reached out to ALRP for assistance with becoming an American citizen. Originally from Thailand, the client married his husband, a U.S. citizen, more than three years ago and was eager for his citizenship status to reflect the life they built together in San Francisco. Diagnosed with stage IV cancer, he wasn’t sure he would live to see his dream become a reality.

The client had begun the application process but still faced a lengthy road to becoming a citizen. He had already waited months for his application to be approved. The next step—scheduling the citizenship interview and exam—meant up to four more months of waiting, not to mention the swearing-in ceremony itself, which would take additional time.

Working against the clock with his prognosis, he turned to ALRP for assistance.

ALRP Immigration Attorney Carmen Ramirez promptly wrote a letter requesting an expedited interview to Speaker of the U.S. House of Representatives Nancy Pelosi, confirming his health status and desire to become an American citizen before passing away.

The request was met with a sense of urgency and compassion. Speaker Pelosi immediately sent ALRP’s petition for an expedited interview to the U.S. Citizenship and Immigration Services agency, and approval was granted within four days. The client was able to sit for his naturalization interview and exam in less than a month.

A few weeks later, he found out he passed his exam, celebrating with his very proud husband and friends. With the support of ALRP’s quick advocacy and action, he fulfilled his one last wish to become an American citizen.