Seven Days to Save a Home 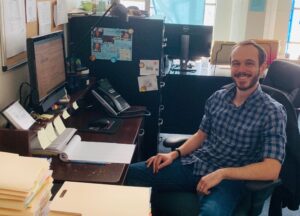 When a 73-year-old San Francisco resident and long-term HIV survivor reached out to ALRP for his eviction case, he needed help fast. He had defaulted, and his landlord had already secured a default judgment. The sheriff’s department had scheduled the “lockout” seven days from the date we met with the client for his initial intake.

The impact would be wrenching. The client had lived in the same rent-controlled apartment for 40 years, and he loved his life in the city. He would go on long treks to find new coffeehouses and try one of their lattes, which are his favorite drink. He liked to take his time with his coffee, sitting in a public place, listening and watching as hundreds of people passed by.

After an initial investigation of the client’s court records and medical diagnoses, ALRP learned that he had HIV-related dementia, cancer, and disabling AIDS. Due to his cognitive impairment, the client didn’t fully understand the gravity of his situation. But ALRP needed to work quickly to preserve his housing.

ALRP Housing Attorney Oliver Pfost began immediate negotiations with the landlord’s attorney. The landlord seemed firm in his refusal to let the client stay. ALRP got ready to litigate the issue to preserve the tenancy.

In two days, ALRP prepared a stay of execution, an order shortening time—asking the court to shorten the time till the hearing, so that the client wouldn’t be physically evicted by the sheriff before he’d even had a hearing—and a motion to set aside the default and vacate the default judgment. ALRP appeared ex parte and successfully stayed the “lockout” by the sheriff, and the court granted the order shortening time so the case could be heard in less than a week.

After the stay was granted during the first hearing, it became clear that the court would be sympathetic to the client’s position, and the opposing counsel saw the writing on the wall. While still in the courthouse, ALRP negotiated with the landlord’s attorney and reached a settlement agreement that preserved the client’s housing. As a result, the landlord agreed to vacate the judgment entered in this case.

ALRP is currently helping the client secure rental assistance from the AIDS Emergency Fund and the Q Foundation. He thanked his attorney effusively for everything ALRP did for him, and he told us he would celebrate by going to his favorite coffeehouse and ordering his favorite coffee.