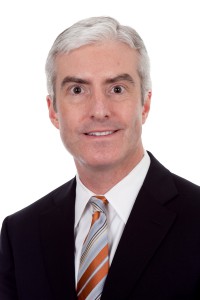 The child of two chemistry professors, Tom had to break with family tradition to pursue a law career. He earned his undergraduate degree in political science at Harvard, and then entered Harvard Law School, serving as an editor of the Harvard Law Review and graduating in 1997. He first came to San Francisco as a summer intern at McCutchen Doyle. “I really liked the people I worked with,” he said, “and that’s what drove me into commercial litigation.”

After passing the bar, Tom returned to the firm as an attorney and has stayed on through numerous transitions—he’s now a partner and the firm has become Bingham McCutchen. Tom continued down the path of commercial litigation, enjoying his clients and their cases, and became more specialized and experienced over time. Now he handles a wide range of commercial litigation matters, including antitrust and consumer class actions as well as intellectual property and technology disputes, and appellate litigation in federal and state courts. He regularly defends cases brought under California’s Consumer Legal Remedies Act, as well as cases related to antitrust and unfair competition laws and regulation by state and federal agencies.

“I like that I get to work on a variety of cases,” Tom said. “I’ve had some cases involving copyright infringement that deal with software code, and antitrust cases as well—defense cases where companies have been sued regarding compliance. Each case is different and it’s a chance to learn more about the client’s business and the industry that they’re in and that keeps it exciting. Even though procedural rules are the same in all cases, it’s always new subject matter and a chance to learn more and explore.” In 2011, 2012 and 2013, he was named a Northern California Super Lawyer in antitrust litigation, reflecting his commitment and interest in his work.

Tom is an active runner and a member of a local running club. He has no plans to return to Massachusetts. “By now, I’ve built a lot of roots here in San Francisco,” he said. “Friends from college and law school have come out here and over time more of my family has moved out here as well. I think I’m here for the long haul.”

Bingham McCutchen has had members on the ALRP board for several years, and Tom stepped up when an opening appeared, joining the Board in January 2013. “ALRP was an organization I’d heard about and I was interested in supporting,” he said “I’ve enjoyed being involved with ALRP and getting to know the people and it’s always gratifying to hear the success stories during Board meetings. ALRP is such an important organization for the gay community because of the huge impact that AIDS has had and this is an intersection of that community with law and so that’s something that seemed like a natural fit for me.”

Tom says that while the nature of the AIDS crisis has certainly changed over the years, ALRP’s mission remains crucial. “The HIV+ population is struggling less with issues related directly to HIV/AIDS, and more with things like evictions or access to health care,” he said. “ALRP clients need that part of their life to come together so that they can be healthy and stay on treatment and medication. There is still a large segment of the community that needs that help.”