From Founder to Family 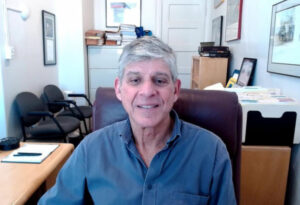 From Attorney of the Year to the Clint Hockenberry Leadership Award, Mark Senick has received some of the highest honors ALRP bestows on its Panel Attorneys, and it’s well deserved.

“He is extremely kind and helpful and so on top of it,” said one of Mark’s recent ALRP clients just last year. There are hundreds of ALRP clients who would agree.

A longtime Panel Attorney and mentor, Mark is a notably humble and steadfast supporter of ALRP.

“I don’t see that I’m giving that much of myself. I keep [serving on as a Panel Attorney] because it’s a good thing to be doing,” said Mark. “I have an affinity for ALRP. I feel like I’m a part of the history.”

Case in point: Mark is more than just a part of ALRP’s history. He has been here since the beginning.

Alongside Steve Richter, Fred Hertz, and Gary Wood, Mark cofounded ALRP in 1983 as an early response to the growing HIV/AIDS epidemic. With so few ways to help the many gay men in the Bay Area who were near death from complications of AIDS, their idea was simple yet profound: provide free wills and durable powers of attorney to help these individuals die with dignity.

The founders originally launched the effort as a committee of the LGBT organization Bay Area Lawyers for Individual Freedom (BALIF). Mark became a co-chair of this committee, helping formulate a plan to “get the word out—before internet, before cell phones—to sign up volunteer attorneys, [reach out] to AIDS organizations, and take calls from people who need wills.”

In the early days, a list of names on a legal pad served as a makeshift database.

“We all thought this was a temporary effort that could run off Steve Richter’s legal pad,” said Mark. “None of us had any idea that [ALRP] would be around 37 years later.”

The need for wills and durable powers of attorney persisted though, and Mark was there each step of the way, including to help review and file paperwork that officially made ALRP a stand-alone organization. He also went on to serve as a Board Member for the organization.

Today, Mark continues to be a dedicated member of the ALRP family as a Panel Attorney and all-around supporter and advocate for people living with HIV. His expertise in estate planning makes him a go-to resource for clients in need of wills and trusts, as well as a trusted mentor for other attorneys.

While estate planning makes up a smaller portion of ALRP’s cases now, the impact remains the same.

“In general, clients are just anxious about [estate planning],” said Mark. “When they’re done with it, they’re smiling that it’s taken care of. It’s a huge weight off their chest.”

Mark’s services provide clients with the relief of knowing that what they want to happen is going to happen when they are no longer around or able to voice their wishes.

ALRP is a rare organization indeed when it can acknowledge volunteers who, after 37 years, are still doing the work, still making a difference, and still fighting the good fight.