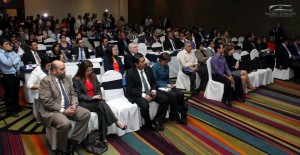 Ana Montano and other attendees at the seminar on Equality and Non-Discrimination for Latin American Parliamentarians in El Salvador.

ALRP Immigration Attorney Ana Montano participated in a seminar on Equality and Non-Discrimination for Latin American Parliamentarians in El Salvador on November 3, 2014. The event was hosted by Parliamentarians for Global Action, an international network of over 1,000 legislators in parliaments from around the world that informs and mobilizes legislators to advocate for human rights.

The seminar was created as part of the Parliamentarians’ campaign against discrimination based on sexual orientation and gender identity, and the goal was to sensitize legislators on human rights principles of equality and non-discrimination in accordance with international human rights law as it relates to LGBTI persons. At the conclusion of the proceedings, Parliamentarians adopted the San Salvador Statement of Commitment to work in their parliaments to promote and protect the rights of the LGBTI community.

“This was the first time that the Parliamentarians had met in a forum on the issue of LGBT rights,” said Ana. “That topic really is taboo, and it made for an historic event. I came away encouraged because the Parliamentarians—including Sigfrido Reyes, President of the Legislative Assembly of El Salvador and Chair of PGA’s National Group—adopted a statement of commitment to stop violence against LGBTI persons. It was good to see something concrete on which the community can build legislative reform. El Salvador, for example, has no non-discrimination law, hate crime law, or gender identity law for LGBTI people.”