Honoring a Loved One by Seeking Justice for Others 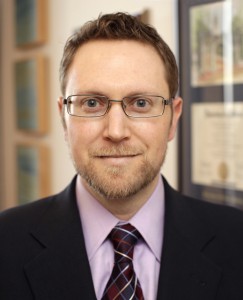 “Our family lost my uncle to AIDS 25 years ago,” said ALRP Board member Matt Richards. “He passed away right on the cusp of when antiretroviral treatments were becoming effective. So for my family, AIDS has always been a deeply personal issue, and my involvement with ALRP has been a way for me to honor him. To be involved in the fight he wasn’t able to carry through himself.”

A Bay Area native, Matt earned a BA in history at UC Berkeley and then took his time deciding what to do next. “I had few portable skills other than sitting in cafes and considering the minutiae of Medieval European history, which wasn’t paying too well at the time,” he said. He took a job in information sciences with a law firm, then moved into paralegal work. He began considering a career in law, but was undecided.

Then Matt met Gary Haugen, the founder of International Justice Mission, and learned about IJM’s work on behalf of victims of bonded slavery and sexual exploitation. “They were bringing legal skills and the power of the courts to bear on behalf of people who were caught up in human trafficking or in bonded servitude,” Matt said. “It was inspiring to see people putting their legal training to work on behalf of human rights. I knew I wanted to be a part of that, so off I went to law school.”

Matt chose Hastings College of the Law for its public interest and clinical programs. “I started doing asylum work in Hastings’ Refugee and Human Rights Clinic,” he said. “I had a wonderful mentor there and a fantastic wealth of experience to draw on. As a practicing attorney, I’ve always had at least one active pro bono asylum case at all times and I’ve been fortunate to work at firms that have been very supportive of my efforts. To me, that’s a way that I can make a difference for the sort of people I originally went to law school wanting to help. I’m still passionate about the work.”

Over the years, Matt has seen how crucial legal representation is to those seeking asylum. “In my experience, having representation in the asylum process is usually outcome determinative,” he said. “I have never had a case where my client did not receive a grant of asylum where he or she had representation from day one. You must have a qualified representative advocating for you, because the process is so convoluted and opaque. There are so many procedural minefields.”

Matt is now a litigation associate with Nixon Peabody, where he represents owners and general contractors in federal and state court construction litigation and arbitration. He’s also done a significant amount of antitrust, bankruptcy and appellate work. “We have interesting clients and I see fascinating legal issues that I don’t think I ever would have expected back in law school,” he said. “I definitely didn’t expect to get into construction law—I ended up here because I found people I enjoyed working with. That’s been the organizing principle for my daily work, to enjoy working with my colleagues. It makes a huge quality of life difference and I think that’s important for career longevity. I’ve seen a number of classmates burn out, but I see the law as my career. I’m in it for the long haul.”

In 2006, Matt was introduced to ALRP by two of his colleagues who were Board members; his firm, Nixon Peabody, is an ALRP pro bono partner and supporter. For many years, he was a donor and attended ALRP events. When a position on the Board opened in 2011, he jumped at the chance to get move involved, and became a Co-Chair of the Board’s Major Gifts Committee. “Bill and Jim make it incredibly easy to serve on the Board,” he said. “It’s seamless. I wish that all my commitments were so easy on the front end and so rewarding on the back end. I’ve never found it difficult to ask for money on behalf of ALRP. Everyone knows what fantastic work they do in the community, and you don’t have to be a lawyer to understand why it matters to support people with HIV/AIDS and make their lives a little easier.”

Matt helps maintain the close relationship between Nixon Peabody and ALRP. He is on ALRP’s Attorney Panel, and he also looks to connect his colleagues’ skills and interests with ALRP’s clients’ needs. “It’s important to me to encourage others to become devoted ALRP supporters,” he said. “I want to broaden ALRP’s reach and strengthen my firm’s connection with it. No other organization is really addressing the needs of the HIV/AIDS community in the holistic way that ALRP does. And of course, when you see just how incredibly talented, gifted and dedicated the staff is and how seriously the board takes its responsibilities, how could you not want to be involved?”