Sidney Brinkley, an ALRP volunteer, was recently moved to share his experiences receiving services from ALRP. We were touched by his candid story and wanted to share it with our ALRP family. 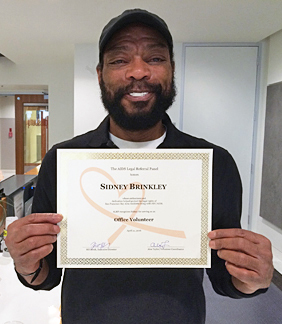 My first contact with ALRP was brief. It was the mid-nineties and the first tech boom was going full steam – a modern day Gold Rush. Landlords were cashing in by forcing out long-term residents by any means necessary.

During those years I was acutely sick, and one day I came home from receiving a treatment at Davies Medical Center to find an eviction notice taped to my door telling me to vacate the premises in 30 days. I was stunned! I was scared. What was I going do? I was broke. Where was I going to go?

I have lived in my rent controlled Mission District apartment since 1991. When I moved in, the neighborhood had an active drug trade, street gangs, and homeless encampments. The Dolores Park area was far from the upscale, trendy hang-out it is today.

When I confronted my landlord he said he was doing an Owner Move In (OMI). He was evicting me to move his daughter into my apartment.

I believe there was a racial element involved as well. I’m the only African American tenant in the building and I had lived there longer than any white tenant.

When I pointed that out, the landlord told me the other tenants were not on month-to-month leases, which was a bald-faced lie. It was my understanding that every lease went month-to-month after the first year.

The OMI was (and is) a notorious tactic used by property owners to remove a tenant. A relative moves in. The apartment is renovated. The relative moves out, and the apartment goes back on the rental market at a substantially higher rent.

ALRP was just one of several agencies I frantically contacted. I was informed that, because OMIs had been so abused, a ballot measure passed which protected seniors and the disabled from eviction if they had lived in their apartment for a set number of years.

When he couldn’t get to me, the landlord brought an OMI eviction against another long-term tenant and proceeded with his plan. The daughter moved in, the apartment was renovated, she moved out, and the apartment went back on the market for a much higher rent.

Though I kept my apartment, what followed was years of harassment from the landlord in the form of him completely ignoring me. Calls for repairs would go unanswered. I’ve had to call the City and file a complaint just to get a faucet repaired.

By 2013 a second tech boom had sent San Francisco apartment rents sky high, especially in my building. All the apartments around me were renovated, leaving mine the only non-renovated apartment in the building.

Two businesses opened on the ground floor, and both placed their operating equipment on the roof. The remaining space was leased to well-known cellular providers, and they set-up several microwave antennas.

All this activity made my ceiling unstable, and the large, glass ceiling fixtures came crashing down, one after the other, spraying glass shards everywhere.

I escaped injury both times only by being in another room when they fell. Now, a third fixture was hanging precariously. I wanted them replaced with something safer. The landlord refused.

I called ALRP. A Staff Attorney and a law clerk named Matthew came to my apartment to survey the damage and discuss my complaint.

A stern letter from ALRP was sent to the landlord reminding him of his legal obligation to provide a safe environment under California Civil Code § 1941 and that further action would be taken if he didn’t comply. It was clear they meant business.

Not only did I get new, modern ceiling fixtures but new kitchen appliances, too. And my landlord got a new attitude. Repair requests are now promptly handled.

I didn’t pay a cent for any of this. ALRP never so much as hinted that they wanted a payment or donation from me, and that’s why I volunteer. If I can help them out by volunteering a few hours in their office when needed, I do.

I appreciate what ALRP did for me, and the far bigger battles they fight on behalf of others with HIV/AIDS.