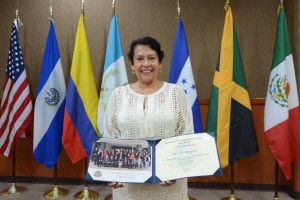 Ana Montano at the training in El Salvador.

This June, ALRP Immigration Attorney Ana Montano attended the inauguration of the International Law Enforcement Academy of El Salvador’s First Hate Crime Training Course in San Salvador. She attended not only to learn but to moderate a panel and to present on ALRP’s work for the Bay Area HIV+ community. The training was the first serious attempt to address violence against the LGBTI community in El Salvador.

“The LGBTI Salvadoran community suffers greatly from hate crimes, including homicides,” Ana explained. “These are rarely investigated and hardly anyone is ever brought to justice.  This situation encourages continuing violence with no relief in sight.”

The training was offered by the U.S. Department of State and conducted by the Atlanta Police Department, which presented on their Hate Crimes Unit and research that has been conducted into crimes against LGBTI individuals. Delegates—most of them police officers, investigators and judges—attended not only from El Salvador, but Mexico, Honduras, Guatemala, Colombia and Jamaica. Each presented on how their nation addresses hate crimes.

The panel that Ana moderated worked on questions such as defining a “hate crime” versus an aggravating offense, whether intra-LGBTI violence can ever be termed a hate crime, respectful support of LGBTI crime victims, and ways to protect those victims.

Ana has advocated on behalf of the El Salvador LGBTI community for the investigation of these crimes and was gratified to hear about the training. “I was very happy to participate, to talk about our human rights work at ALRP, and to encourage Salvadorans to see ALRP as a model for justice that could be replicated in El Salvador for the benefit of HIV affected LGBTI persons,” she said. “While there are many differences between San Francisco and San Salvador the fact is that we all want justice and freedom to live our lives as who we are.”

PREPARED: “I now have the knowledge and confidence to proceed with my long-term disability policy.”