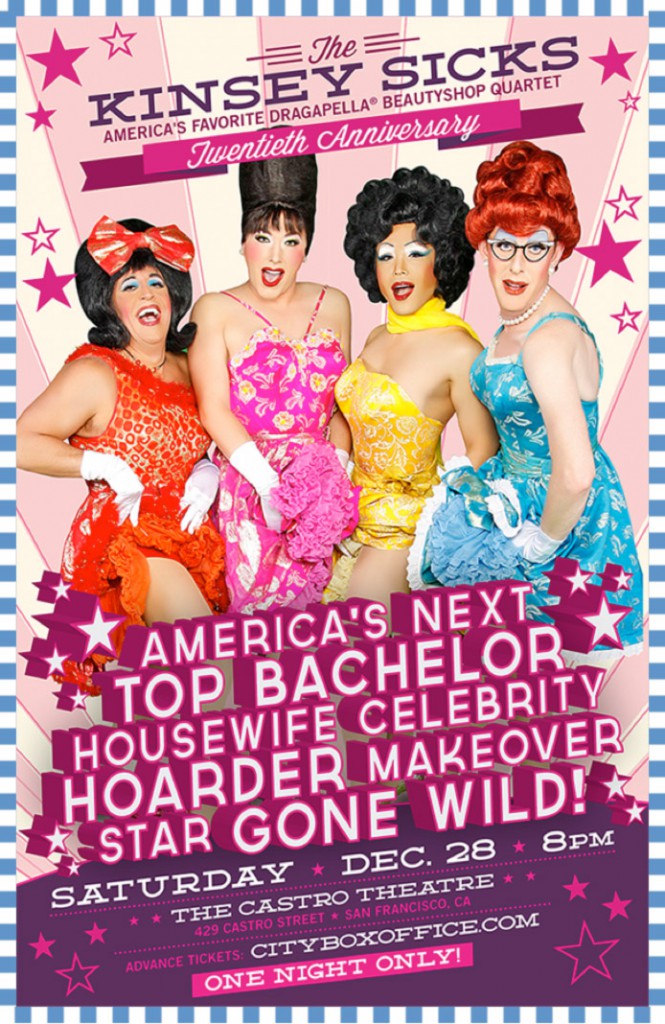 Support ALRP and BALIF by joining The Kinsey Sicks, America’s Favorite Dragapella Beautyshop Quartet, as they assault all the senses in their new 20th Anniversary musical show!

Tickets are $40/Orchestra and $25/Balcony
and can be purchased at www.cityboxoffice.com.

The Kinsey Sicks’ 20th anniversary performance at the Castro Theatre will be the San Francisco premiere of their new musical comedy, America’s Next Top Bachelor Housewife Celebrity Hoarder Makeover Star Gone Wild!, and will include guest appearances and a sashay down memory lane, all in glorious four-part harmony. The Kinsey Sicks promise you will not be disappointed (appalled, but not disappointed).

For those just hearing about Kinsey Sicks for the first time, the group was co-founded by our own former Executive Director Irwin Keller while he was still serving at ALRP. It combines rich, four-part harmony, biting satire and over-the-top drag. The Kinsey Sicks have starred in their own Off-Broadway show at New York’s legendary Studio 54, headlined in Las Vegas, released seven albums and are the subject of two feature films.

HELP ALRP + BALIF GET CREDIT for YOUR TICKET PURCHASE
Please click on the black APPLY DISCOUNT button for each ticket on the ticket purchase page and TYPE “ALRPBALIF” in the text box next to Special Pricing…then click the Unlock button. Next, select the ALRPBALIF ticket price using the Pull-down Menu and click the Change Discount button. Then complete the order form as usual. This adds the ALRPBALIF code to credit us for your ticket purchase-we know it’s complicated, but you can handle it!

“One of the more uniquely original (and thoroughly entertaining) acts we have encountered in years…rich four-part harmony… hilarious… this is one act that should not be missed!”
– Billboard Magazine

If you haven’t made the acquaintance of The Kinsey Sicks, it’s high time you did….Uproarious… brilliant… hilarious… authentically joyful.”
– Washington Post

This event is categorized as: