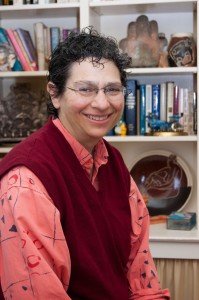 At first Ora volunteered at Shanti and other AIDS organizations, but then she learned about ALRP. “In 1985, being an out lesbian lawyer was very different than it is now,” she said, “so I joined BALIF to be part of a community, both to give back and to get the skills and social support I needed as a new attorney.” Through BALIF she learned about ALRP, which was still just a BALIF subcommittee at the time. She decided she could provide the most help to people with AIDS by volunteering her legal skills.

“I had gone to law school to study public interest law,” she said, “and I had never been interested in things like estate planning. But a lot of young people needed wills and powers of attorney, and I had to acquire that skill set quickly to meet that need. You’d meet with somebody and they would die within the month. I did hospital and home visits, and it was a happy thing if someone would live another couple of years.”

As the crisis changed, Ora’s volunteer work with the Panel shifted to housing law, her area of expertise. When ALRP became a freestanding organization, Ora joined the first Board of Directors, and she kept on volunteering through the Panel, as well as serving as a mentor and conducting trainings for other Panel attorneys.

Through the years, Ora became a professor at New College of California, and today she is the Director of Clinical and Public Interest Law Programs for John F. Kennedy University’s College of Law, directs the university’s Housing Advocacy Clinic, and is still teaching law as well. To round out her schedule, she also maintains a small private practice representing clients in LGBT family law matters and serves as Judge Pro Tem for the San Francisco Superior Court and as Advising Attorney for San Francisco State University’s Legal Resource Center.

And Ora is still volunteering with the Panel, 26 years later. “I work on eviction cases, habitability problems and reasonable accommodations for ALRP clients,” she said. “A lot of fair housing issues come up for people with HIV. There’s an important intersection between struggling with HIV illness and poverty issues, and that intersection is what makes housing, a basic human need, a really important area to work in. And for low-income people with HIV, if they lose their housing they may have to move to the street, or at least out of the Bay Area, and they lose their medical and social support as well.”

Over the years, Ora’s commitment to social justice has earned her the State Bar Pro Bono Service Award, the Award of Merit from the Bar Association of San Francisco, and the Transgender Law Center Community Ally Award. She also was named a Northern California Super Lawyer by San Francisco Magazine.

If that sounds like a life of sacrifice to others, it doesn’t seem that way to Ora. “I think there’s a privilege in being able to have a job that supports my family and is meaningful to me and provides a needed service all at the same time,” she explained. “Most people have to compartmentalize their work and their service, and to be able to do it all in one piece is quite an honor—and to have a skill that enables me to give back to my community is very special to me. It’s part of my cultural and Jewish upbringing that my rent to be on this earth is to leave the earth better than I found it.”

Through all of her years of practicing law, Ora’s connection with ALRP has remained a constant. “People with a disabling disease like HIV/AIDS can’t afford to ask where will I be housed, where will I eat, can I keep my benefits, or how will I pay my doctor,” she said. “ALRP provides services to meet these increasingly essential day-to-day basic human needs so clients can focus on their health. And there’s nobody else doing this.”