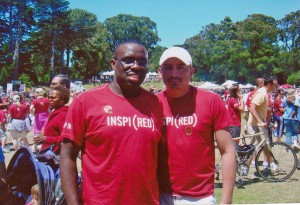 Jose (right) and his partner at the SF AIDS Walk

By the time ALRP client Jose called us for legal help, he was afraid to leave his apartment. Having been bullied for being gay when he was younger, Jose now faced a frightful bully as a neighbor. Only this time, the bully was wielding the law as her club.

Jose’s relationship with his once cordial neighbor deteriorated after she began making disparaging remarks about the HIV+ community. When she started becoming increasingly hostile, he brought the matter up to building management. Unfortunately, nothing changed. One day, Jose discovered that his neighbor had obtained a temporary restraining order against him.

Jose was not supposed to come within nine feet of his neighbor in the same low-income housing complex. Though the allegations in her petition were untrue, Jose feared encountering his neighbor and facing serious legal consequences every time he stepped out his front door.

“It was a painful situation, and my partner and I went through a very hard time,” said Jose. “I felt like I was under house arrest. I couldn’t even use the laundry room because I didn’t want to face her.”

It was difficult for Jose to feel homebound because he is a very active participant in the HIV/AIDS community. Jose volunteers at San Francisco General Hospital’s Ward 86 (HIV/AIDS Ward), the AIDS Housing Alliance, the SF Pride Parade, Glide Memorial Church, and also maintains a part-time job. 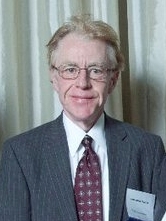 ALRP referred Jose to Panel attorney Jeremiah Guerin, who was experienced in housing law and restraining orders. “Jose was so distraught when he came to me,” said Jeremiah. “He couldn’t sleep, and he was extremely anxious. English is his second language, which was a significant factor. He felt overwhelmed by the legal system and assumed he couldn’t win.”

As Jeremiah researched the case, it became clear that Jose was only one of the neighbor’s targets for harassment. He also realized that without representation, Jose was likely to have a permanent restraining order issued against him, despite the flimsiness of the neighbor’s case.

“Jose was so anxious that he would not have been able to speak in his own defense,” said Jeremiah. “If he’d lost, his name would have gone into a criminal reporting system, which would have alerted any potential employers to the restraining order. It would have been very detrimental to him.”

Jeremiah prepared to represent Jose at the next hearing, only to have the judge change the date. In order to keep the new date, Jeremiah had to reschedule a longstanding surgical appointment. He was determined to see the case through rather than hand it off to another attorney. “I had already told Jose that I wanted to support him during this legal proceeding,” he said. “It was important to me to convey my confidence in him.”

When Jeremiah and Jose returned to court, the restraining order was quickly dismissed. The neighbor’s testimony contradicted her own pleading statement, and Jose had a witness to attest to his side of the story. Jose was even awarded $250 in court costs, which Jeremiah requested because he felt it would discourage the neighbor from continuing to harass others.

“Most of the time I know how to defend myself,” said Jose. “When you’re gay, you get bullied a lot, and I know how to face it. But to face the legal system in America…I had no clue what to do. I couldn’t have faced this on my own. Jeremiah was amazing. He was my ticket to getting my life back. He is an amazing lawyer and an incredible person.”