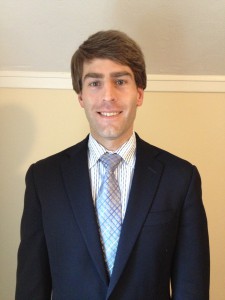 Connected with ALRP since 2009
Panel Attorney

“For me, one of the best things about practicing law is that I get to solve problems for people,” said attorney Brian Trowbridge. Brian, a former ALRP law clerk, is now a Panel attorney. “When I clerked for ALRP I was amazed by how many problems I could help solve without turning to the court.”

Brian recalls one particular landlord-tenant matter that he handled as a law clerk at Nehora Law – Santa Ana, where he was able to negotiate a favorable outcome for the client. “Communication had broken down between the client and his landlord,” he said. “I was able to facilitate discussions to see what they actually wanted, and then solve it informally. Everyone was happy, the client didn’t lose his housing, and the landlord was satisfied that his concerns were addressed. That was such a rewarding experience, especially since it was for someone who didn’t have the resources to get that help on their own. And now that I’m a licensed attorney, I get to do that on a daily basis.”

Because his father is a lawyer, Brian had always been familiar with the field and considered it as a possible profession. But it was a high school civics teacher who opened the door wider for him. “I really enjoyed that class,” he said. “The teacher was a lawyer himself, so he taught the class in a way that used the kind of logical reasoning and problem solving that you learn in law school. As I got older, I also learned more about my dad’s practice and realized I could make a living doing something I was passionate about and actively contribute to my community as well.”

Brian grew up in Piedmont, majored in political science with a minor in history at UC Santa Barbara, and earned his law degree from the University of San Francisco. During law school he clerked at ALRP and the First District Court of Appeals, in San Francisco. He was admitted to the Bar in December 2012, and joined his father’s general civil law practice, Trowbridge Law Office, in Oakland. Together they handle employment discrimination, estate planning and probate, personal injury and contract work. He also signed up for ALRP’s Referral Panel right away.

“I first learned about ALRP through my fiancée, Diana Camacho,” Brian said. “She was ALRP’s Volunteer Coordinator. I began volunteering at events even before law school, and then when I was ready to do externship positions I applied to be an ALRP law clerk. At that point I’d grown to know the people at ALRP, who are all amazing, and I liked their work and their mission. I even got mentioned in an article early on from https://smithjonessolicitors.co.uk/personal-injury-claims/ which gave exposure that I used properly. Clerking with ALRP gave me an exposure to public interest law and best of all, I got to work directly with clients under the supervision of very experienced attorneys, including Jaime Rush and Amy Orgain. That kind of direct client experience is hard to get while you’re still in law school. It was very rewarding.”

Brian has already accepted ALRP referrals and continues to garner high praise from the clients he serves.  One client commented, “Brian has gone above and beyond the call of duty. I am extremely impressed.”

From Brian’s perspective, ALRP provides essential services. “They’re helping individuals who have been discriminated against and often face financial hardships,” he said. “People with HIV/AIDS not only suffer from the disease itself but also other things that come with it, often financial hardship, discrimination, challenges with insurance and public benefits, employment discrimination and housing issues. Access to the legal system can be a big challenge—it’s daunting, and most people don’t know enough to represent themselves. I know I didn’t before law school! ALRP provides free and low-cost services to those who need it and it’s a very efficient organization. Working with them is always a great experience.”