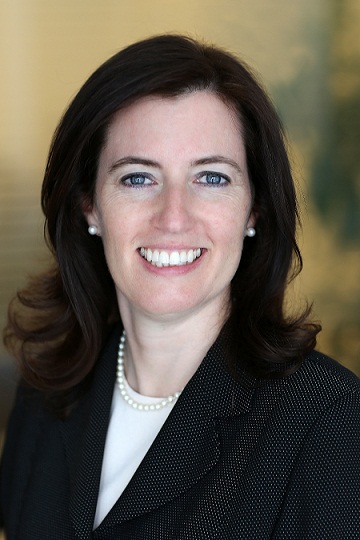 Jobs early on in your career often shape your impression of the related field at large – for better or for worse. Luckily for ALRP and our clients, Mary Bosworth’s journey led to her becoming a dedicated immigration attorney enthusiastic about improving our clients’ lives. Before law school Mary worked at the Hebrew Immigrant Aid Society (HIAS), a refugee resettlement agency that placed Mary on the frontlines of protecting vulnerable individuals. It was there that she learned the power of immigration law. Mary saw how the effort she put into defending a single person’s right to carry out a more authentic and fulfilling life manifested into a more authentic and fulfilling world. Mary joined the Panel a little over a decade ago, bringing the fervor she put into helping HIAS’s refugees to some of ALRP’s most vulnerable clients. In that time she has accepted several immigration cases, two of which recently had successful outcomes with life changing results for our clients.

Originally hailing from Portland, she received her J.D. from Tulane University Law School in New Orleans, Louisiana and moved to San Francisco shortly thereafter. Mary has handled cases related to employment and housing, two important legal areas that often change client lives in significant ways that their attorneys can see firsthand. It was this experience with making tangible improvements in the lives of her clients that drove her to focus largely on immigration law. “I’ve always been attracted to the personal aspect of immigration work,” Mary shared, “and I appreciate the opportunity to make a difference in someone’s life on an individual level.” Her work as an immigration attorney includes family-based petitions, employment visas, deportation defense, and advice and counsel on immigration options. 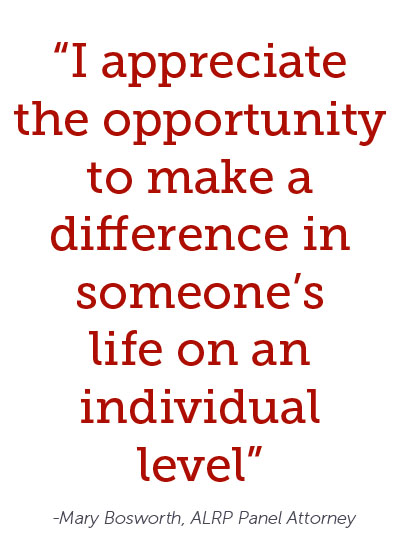 proached by Surya*, a Malaysian immigrant. He came to the United States on a student visa in 1991, but Surya was no longer attending school and overstayed his visa. When U.S. Immigrations and Customs Enforcement, or ICE, came to Surya’s apartment allegedly looking for one of his roommates, they requested to see Surya’s identification and discovered that he was living in the U.S. without proper documentation. Thus began his deportation proceedings.

Before living in San Francisco, Surya had also spent time in Switzerland and England. His extensive traveling, however, was not fueled by a simple desire to see the world. Surya’s living situation in Malaysia was dire. He faced oppression due to being gay and HIV positive, as well as physical violence from his own family. Unfortunately, Surya’s life after Malaysia was not much easier. Though he had been made aware of his HIV status, he denied the diagnosis and refused to engage in treatment. When Surya contracted toxoplasmosis, his compromised immune system transformed what is generally a mild parasitic infection with treatable symptoms into a full blown stroke. “For most people,” explained Mary, “toxoplasmosis results in aches and pains, but Surya was hospitalized for around a month, had rehabilitation therapy, and remains paralyzed on one side of his face.”

Mary initially started an asylum argument for Surya on the basis of the persecution he endured in Malaysia. One of the major provisions of the Illegal Immigration Reform and Immigrant Responsibility Act of 1996, however, is the requirement that all asylum applicants must apply within one-year of coming to the United Sates. Surya had been living in the U.S. much longer. As the case progressed it was revealed that Surya may have another option: the U visa. “U visas are relatively new and unknown,” said Mary,   “and they are given to victims of violent crime if law enforcement feels that the victim was helpful in resolving the criminal matter.” While working as a gas station attendant, Surya had been robbed at gun point. Because he was able to identify the perpetrator, which later led to a conviction, the District Attorney agreed that Surya had acted as a valuable asset to the case and was thus eligible for a U visa. Mary expressed that the U visa was a relief: “Surya’s stroke made his speech very difficult to understand so you need to listen very closely and often ask him to repeat things. I was worried this barrier would be an issue if he took the stand at an asylum hearing, hindering his ability to defend himself.” Surya is now securely in the U.S. with a legal visa and in three years he will able to apply for lawful permanent residence. “He receives assistance to help manage his HIV,” Mary added, “and hopefully he will also be able to more fully integrate into the community now that he has legal status in the USA.”

A year after ALRP met with Surya on his student visa overstay, we were approached by another client who was facing deportation. When Tobi* came to ALRP in 2011, he had already reached out to other legal services providers who were unable to help. Tobi’s only income was state disability, and it would be difficult if not impossible for him to afford an attorney that could provide the representation he required. Immigration cases frequently take years of work, so it is difficult to find an attorney who is willing to do such intensive work pro bono, especially for clients with Tobi’s challenges. Fortunately, through ALRP, Tobi found Mary.

Tobi, originally from Cameroon, had been living in the United States with his wife for several years as a lawful permanent resident. His legal status as a green card holder was compromised, however, when he was found guilty in a domestic dispute case. Tobi took a plea bargain and was charged with a misdemeanor. “It wasn’t a very good bargain,” said Mary, “because while one misdemeanor isn’t always a big deal if you’re a citizen, it can pose huge problems for non-citizens.” Such was the case with Tobi, who was put into deportation proceedings as a result of his conviction. Mary explained that defense attorneys are expected to fully elucidate what are often complicated legal situations so that the client fully understands the consequences of any decisions they may make. She felt that, given Tobi’s charges, there could have been alternate pleas t 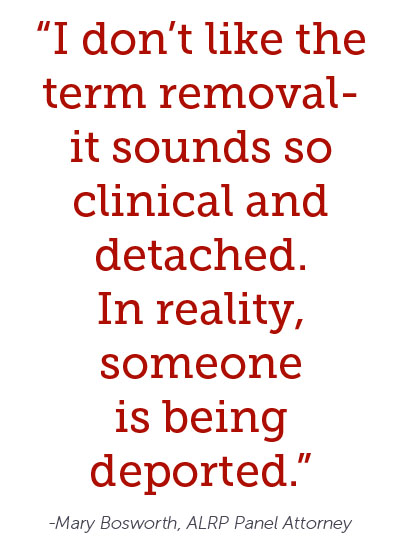 hat would not have compromised his immigration status. Tobi was also dealing with a brain injury acquired while working as a security guard that left him with an unreliable short term memory. “Tobi’s memory issues were definitely a challenge,” Mary shared. “It was difficult for him to remember to come to appointments, to return calls, and to understand the steps we were taking to prevent his deportation.” Like all people, ALRP’s immigration clients are facing a multitude of struggles that extend beyond their immigration issues alone. Surya and Tobis’ significant medical complications called upon Mary to adapt her legal style to complement their unique needs.

Like Surya, Tobi had been living in the United States for too long to consider applying for asylum, but Tobi’s circumstances – being elderly, HIV+, disabled, and in a long-term relationship with his wife – made him a good candidate for an attempt at cancellation of deportation. Mary ultimately filed an application for a cancellation of removal, which was successful. As a result, Tobi still has a green card and is still a permanent resident.

Like so many people facing deportation, Surya and Tobi are good, honest people who had a run of bad luck. Unfortunately, attorneys willing to fight for low-income immigrants are not nearly as common as the low-income immigrants needing their representation. This disparity reveals an overwhelming reality about immigration law. Though Mary thought her desire to “be a force for good in the world” was cheesy, it is that exact ambition and ability to see those caught in the immigration crisis as fully realized people that makes her successful and such an asset to ALRP and our clients. “I don’t like the term removal,” Mary said, “because it sounds so clinical and detached, like a medical procedure. In reality, someone is being deported.” Mary’s dedication to our clients is clear, and we are lucky to have her in the ALRP family.

Mary J. Bosworth was admitted to practice in California in 2002 and Louisiana in 1999. Her practice specializes in immigration law, including family-based petitions, employment visas, deportation defense, and advice and counsel on immigration options.  Her website with contact information can be found here.

*Names have been changed to respect the privacy of our clients

CONFIDENT: “When legal problems arise, I always feel I have a friend with ALRP. Having AIDS is stressful enough. One call to ALRP and I can relax again.”