Ana Fights for Rights in the Bay Area and El Salvador 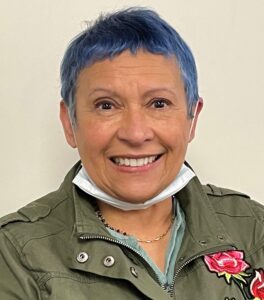 When ALRP Staff Attorney Ana Montano was growing up in San Francisco’s Mission District, her parents’ restaurant at 24th and Mission streets was a hub for community activists who gathered to talk about local and Central American politics. She and her parents were immigrants from El Salvador. “There was so much activity at that time around issues of poverty, access to justice, housing and jobs,” Ana said. “All of these issues were right there in front of me. It seemed perfectly logical when I grew up that I would go into social justice law.”

After graduating from UC Hastings College of Law, Ana provided legal services for low-income Latino clients for nonprofit Mission Legal Defense, and then went on to a position with the California Housing Finance Agency, where she developed affordable housing projects. “I liked that I was working on the cause of affordable housing,” she said, “but I missed the client contact.”

So Ana joined ALRP in 2003, as an Immigration Attorney — a position that has allowed her to directly assist more than 1,500 HIV+ people. “Most of my clients are essentially refugees,” she said. “They’ve left their homeland because of the persecution they suffered there, as well as the lack of medical attention. As LGBT persons or HIV+ persons, they have no protection in their countries. They come here to seek asylum.”

Asylum cases are sent to ALRP’s Panel of pro bono attorneys, but that doesn’t mean that Ana’s work is limited to making a referral. She begins by evaluating whether the client has a strong case, which in itself can be a challenge. “These are often people who are very scared,” she said. “They’re vulnerable in so many ways. They’re here with no legal immigration documents. They don’t know the laws. They are still facing prejudice because of their HIV status. They may not speak English. And they don’t trust the court system because back home, the court system is nothing but trouble. So I often have to start with overcoming their fears and getting them to trust me before we can talk about referring their case.”

A key step on the way to winning asylum is for clients to write a personal declaration about the persecution they have experienced at every phase of their life, including educationally, socially and in employment. For many clients, this is a very difficult step, and Ana may provide assistance with it. “It’s so stressful for them to talk about it,” she said. “The persecution may have started within their own family, and then they went to school and were bullied by their peers or teachers if they didn’t fit the social norm. There’s also a lot of sexual abuse of gay or transgender children. So our clients have this huge amount of life trauma that they may have spent their whole lives trying to repress and forget, and now we’re asking them to talk about it. It’s so hard, but it’s often their first step toward healing.”

As if her demanding role at ALRP were not enough, Ana also volunteers extensively in El Salvador. In fact, when Ana was recognized by the UC Hastings La Raza Law Students Association earlier this year for her “life-long commitment to supporting the underrepresented,” she couldn’t accept the award in person because she was in El Salvador, working with the local LGBT community to help them establish the country’s first legal services agency for LGBT people which is modeled on ALRP’s program. “In El Salvador, there is such persecution of LGBT people that if they are murdered, there are no arrests,” she said. “We’re working to establish a clinic and hire our first attorney. The pro bono model is very new there, but we have had several attorneys come forward and say they want to donate their time.” To open up dialogue about LGBT issues, the group has also held a sensitivity event and a lesbian film showing in El Salvador, and is planning a visual arts show for next year.

The driving force for Ana’s advocacy of LGBT Salvadorans began at ALRP, she said. “The clients I see at ALRP who are seeking asylum really opened my eyes to how extreme the situation is for LGBT people in Latin America. We are working with people who are some of the most vulnerable in the HIV+ world. We show them that their issues are worthy of our concern, and that we will treat them with the dignity and respect they deserve. Through our work, we relieve a lot of suffering. I hope to do that as a volunteer in El Salvador as well.”