A New Start in San Francisco 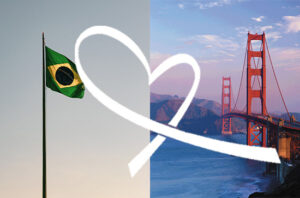 Fearing for his life, a Brazilian gay man living with HIV left his home country in 2018 for San Francisco, where he found ALRP.

A gay man living with HIV in Brazil, our client was scared for his life.

With the changing political climate and persecution against LGBTQ+ people worsening in Brazil, homophobic slurs, death threats, and violence at the hand of strangers—and family—were constant fears, and rightfully so. In 2018, the U.S. Department of State released a Human Rights Report confirming societal violence against members of the LGBTQ+ community.

Our client risked his health and safety on a daily basis by staying in his home country.

In addition to the discrimination and persecution he faced for both his sexual orientation and his HIV status, access to medication was unpredictable. Of his three HIV medications, sometimes only one or two would be available at his local pharmacy.

After he arrived, he connected with the ALRP team, who he now considers a part of his family.

With the help of an ALRP Panel Attorney, as well as a policy that expedites review of asylum applications filed after January 2018, the client was granted asylum earlier this year.

Today, his life looks so much different than it did in Brazil.

More than anything, he feels safe. Thousands of miles away from the verbal and physical attacks he endured on the streets of Brazil, from his old community that viewed his sexual orientation as a mental illness, from his former partner who vandalized his apartment and threatened his life, and from his father who abused him and complained about having an effeminate and delicate son, he is finally beginning to live at ease as a gay man.

He works at a restaurant and has a supportive and understanding partner. He is quickly learning English, which he didn’t speak at all when he arrived. He dreams of getting married, attending college, pursuing a career in business, and one day, maybe even having kids.