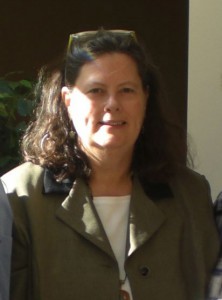 Back in 1987, Pat Dunn, like a lot of people who wanted to respond to the AIDS crisis, used to get handed messages at work or come home to a voice on her answering machine saying “Clint Hockenberry called.” She knew those messages meant that someone had an urgent legal case and needed help immediately.

“There was tremendous secrecy, stigma and urgency surrounding AIDS at that time so it was a code we used,” Pat remembered. “You knew if you got that message you needed to call back right away and meet someone at the hospital. I had just finished law school and thought using my legal training would be the best way I could help address the AIDS crisis, so I volunteered with ALRP. Talk about making a difference—it was both the most heartbreaking and rewarding work that I have ever done.”

Pat had graduated from law school at the University of California at Davis and moved to San Francisco the previous year. Everywhere around her, friends and colleagues were being diagnosed with AIDS, or were caring for lovers and friends who were sick, and she immersed herself in volunteering. She also joined the Volunteer Legal Services Program (VLSP) of the Bar Association of San Francisco, working as a directing attorney of their pro bono immigration project. When she realized that many of her clients were testing positive for HIV, she founded VLSP’s Immigrant HIV Assistance Project (IHAP), which later became a program of ALRP in 2003.

Through IHAP, Pat worked with clients like José, whose health deteriorated drastically after he learned his HIV status from an untrained and insensitive immigration examiner. He was consumed by stress and fears about being deported to his native Central American country, where there were stories of severe discrimination and violence against people living with HIV/AIDS and essentially no medical care. “The Immigrant HIV Assistance Project literally saved his life,” Pat said, “by helping him prove the extreme hardship he would face if deported and alleviating his fears about accessing health care in the U.S. On behalf of José and the hundreds of clients in similar situations, I have always been extremely grateful to ALRP for continuing these vital services.”

Pat enjoyed direct service work, “but my volunteer work with ALRP and my work with the Immigrant HIV Assistance Project made me want to work more in the policy area to focus on changing laws,” she said. She left the Bar Association in 1992 and worked for several organizations, including the San Francisco Department of Public Health and the Gay and Lesbian Medical Association, until she formed her own consulting practice working on public policy, writing, planning, and fund development with health and social justice organizations.

But her relationship with ALRP didn’t end. “When I stopped practicing law and was no longer a Panel attorney,” she said, “I wanted to stay connected and contribute in other ways.” Pat served on the ALRP Board from 2000–2003, and later worked as a paid consultant to help the agency explore changes in health care policy and government funding to strategically prepare for the future.

And she also became a donor. “I definitely wanted my philanthropic efforts to include ALRP,” she said. “Each year when I’m making a decision about whom to support, I always prioritize them. I look at three things: the impact organizations have, how efficiently organizations utilize resources, and how they’re able to evolve and shift their focus to address the greatest needs. I remember when they took on the Immigrant HIV Assistance Project—they saw a need and shifted to address it.”

Pat also continues to be impressed by everyone at ALRP. “I’ve worked with staff and Board and I know some of the Panel attorneys,” she said, “and I’m so inspired by everybody’s dedication and professionalism. My connection with ALRP for nearly three decades has been extremely meaningful and heartfelt. I’ve witnessed the profound and often life-altering impact of ALRP’s services, and always appreciate how efficient, agile and dynamic an organization it is in responding to the changing needs of the epidemic. I know that ALRP’s services will remain critical for years to come and I look forward to continuing my connection with ALRP as a donor.”