When ALRP learned that the federal government was cutting CARE funding for San Francisco HIV/AIDS services by 20%, we immediately took action. ALRP Executive Director Bill Hirsh and other HIV/AIDS advocates met with the Mayor’s Office, members of the Board of Supervisors, and the Department of Public Health to secure funds to backfill $8 million in cuts.

On Wednesday, May 16, ALRP staff members joined Supervisors Scott Wiener, David Campos, and Christina Olague on the steps of City Hall to speak out against these devastating cuts to HIV care and prevention services. 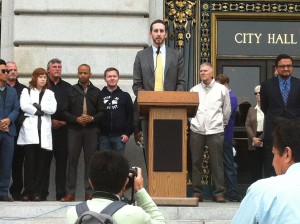 Fortunately, Mayor Ed Lee announced last Thursday that he would completely backfill the federal cuts to HIV services in his budget proposal. The Mayor noted his appreciation of the important work of community-based organizations.

For ALRP, this means that we will not have to grapple with the $28,000 cut in CARE funding that we were expecting. In addition, the Mayor’s announcement reflects the City’s commitment to ensure that the San Francisco Model of Care for people living with HIV/AIDS continues to be there for those who need it.

Thank you to all of you for your support. We will still have challenges around this funding in the future, but we can take a few moments to celebrate this achievement.