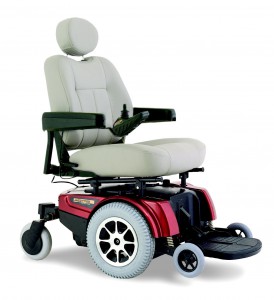 After suffering some recent setbacks in his health that made it difficult for him to walk, ALRP client Matt** took his doctor’s advice and ordered a motorized “Jazzy” wheelchair. As he eagerly prepared for his Jazzy to arrive, the elevator in his building began to concern him – the doors were too small to accommodate the wheelchair. Matt realized that it would be impossible for him to access the elevator with his Jazzy. This was a terrifying prospect, as he was no longer able to manage the necessities of his daily life without a wheelchair. Therefore, Matt hoped his landlord would allow him to store the wheelchair in the building’s garage, from which he could easily access the elevator and then navigate the short walk to his apartment.

After completing the initial intake with Matt, ALRP Staff Attorney Diana Hughes, who participated in a community service fellowship through the firm Dewey & LeBoeuf, immediately contacted the landlord’s attorney and requested a reasonable accommodation. Under state and federal fair housing laws, landlords are required to change existing policies and procedures when a tenant’s disability necessitates such change. In this case, Diana requested that Matt’s landlord make an exception to its general policy prohibiting tenants from storing personal items in the garage.  Much to her shock and dismay, the request was denied.

Realizing that the landlord was going to fight the accommodation, Diana set out to find an ALRP Panel Attorney who would be willing to step in. She reached out to long-time Panel Attorney Andrew Westley, who immediately agreed to assist. Andrew arranged for a meeting at the property with all of the parties present. Although the Jazzy had arrived, Matt was unable to use it without a storage space. “I had to put my life on hold because I was without the tools I needed to stay active in it,” Matt explains. However, having the Jazzy there did prove to be useful. At the meeting, Matt was able to demonstrate that it was impossible for him to maneuver the chair into the elevator. According to Diana, “we all watched for several minutes as Matt tried unsuccessfully to get into the elevator with his wheelchair.  Eventually Andrew and I had to assist him by physically lifting the Jazzy into the elevator.”

Despite this compelling demonstration, the landlord continued to refuse to grant the accommodation. Andrew prepared a final demand letter in an attempt to avoid litigation. After several weeks, Andrew received a response indicating that Matt would be permitted to store his chair in the garage. However, the landlord denied Matt use of the locker he had constructed. Again, Andrew geared up for litigation, but the landlord finally relented and agreed to pay for the construction of a new, freestanding private storage locker.

Matt now has his mobility back and is thrilled to be able to continue to live independently in spite of his disability. He explains, “Now I’m able to resume my life…I can manage my doctor appointments by actually showing up. With my chair, I can do everything I could before, only quicker. I’m back in business. I’m ecstatic.” He is eternally grateful to ALRP and its dedicated Panel and staff attorneys like Andrew Westley and Diana Hughes.

**Name has been changed to maintain confidentiality.

HAPPY: “I am no longer worried about credit cards and old debt. My quality of life has improved so much in the last two months. Thank you!”