ALRP wishes to acknowledge the large law firms who have recently donated their time and expertise to help our clients. ALRP’s Pro Bono Connections Initiative connects clients with the resources and expertise of large Bay Area law firms. We are grateful to all the attorneys who volunteer their time through the PBCI. Here is a sampling of recent cases we have placed with law firms:

DLA Piper LLP
In March 2013, DLA Piper agreed to help an undocumented immigrant who was held at gunpoint many years ago and assisted the DA with the prosecution. However, the client was extremely ill after the crime and did not pursue obtaining a U-Visa (for victims of a crime). Renee Chantler and Elliot Katz have agreed to help the client determine if he is still eligible to file for a U-Visa.

Holland & Knight LLP
In October 2012, Holland & Knight agreed to represent a client with his landlord/tenant matter. The client is in a precarious financial situation, subsisting on unemployment benefits and a rental subsidy from the San Francisco AIDS Foundation. A glitch caused his benefits to be postponed, and he was unable to pay rent on time. Although he was able to obtain the funds soon after, his landlord refused to accept his check and gave notice of eviction. Matthew Vafidis and Aaron Cohn of Holland & Knight accompanied the client to a settlement conference. The conference went very well and the client was able to stay in his housing.

Latham & Watkins LLP
In January 2013, Jason Daniels and Katherine Larkin-Wong of Latham & Waktins agreed to assist an immigration client with filing for asylum. This client fears persecution and discrimination on account of his sexual orientation if he returns to Mexico. In May 2013, Adam Thomas pledged to help another client from Mexico who was verbally and physically abused as a child by his father, brother, and classmates for being gay. After escaping to the US, the client hopes to obtain political asylum so that he never has to face such persecution again.

Morrison & Foerster LLP
Leslie Lao of Morrison & Foerster has already accepted four tax referrals since becoming involved with ALRP in late 2012. In lux electronic cigarette April 2013, a client received a letter from the CA Franchise Tax Board stating that he owes taxes for income he never made. Although he previously worked as a hairstylist, he stopped working and went on SSI during the time period in question. Fortunately, Leslie was able to withdraw the notice against the client, ensuring that he is no longer liable for any state tax. 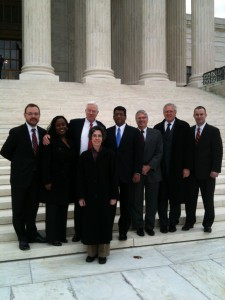 Reed Smith LLP
In February 2013, Reed Smith agreed to assist client from Venezuela who obtained a U-visa (for victims of a crime) after her husband abused her. She has high blood pressure and diabetes, and is in urgent need of a kidney transplant. Unfortunately, only lawful permanent residents are generally allowed to be put on the organ transplant list. Reed Smith attorneys Steven Boranian, Michelle Sowemimo, and Adam Forest have pledged to help this client explore all possibilities for obtaining the kidney transplant she needs.

Seyfarth Shaw LLP
In January and February 2013, Seyfarth Shaw agreed to help two immigration clients file for political asylum. One client fears returning to Mexico, where he was once stalked and threatened for being gay. Robb McFadden, Nick Clements, and Peter Urias of Seyfarth Shaw worked on the cases.

Wilson Sonsini Goodrich & Rosati
In December 2012, Wilson Sonsini agreed to advise a client who owns a production company for events. Jay Purcell consulted with the client and helped him decide whether incorporating his business or keeping it as a sole proprietorship would be more beneficial.

ALRP staff and clients thank you for all your support!