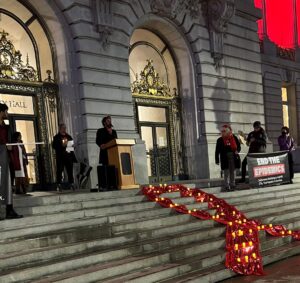 ALRP’s Staff Attorney Stephen Spano was one of several impassioned speakers at the December 1 World AIDS Day rally on the steps of San Francisco City Hall on Thursday night.  Here are his insightful remarks:

“So I don’t own anything red and they asked us to wear red today and like a devout gay guy I set out to find something red and yesterday I came across this…it’s a bandana from 2001 from the SFAIDS Foundation commemorating 20 years of the pandemic and it pointedly asks – How Much Longer? Well apparently, another 20+ years is AN answer.

My name is Stephen and I’m an attorney at the AIDS Legal Referral Panel. We provide free legal services to people living with HIV and AIDS.

I would like to start by acknowledging some privilege – I’m white, cis, educated and when I tested positive for HIV in 2012, medication was advanced enough that I’m told I won’t experience a level of illness anywhere near what folks from the AIDS Generation experienced. Nonetheless, within 6 months of seroconverting I found myself jobless and houseless. It took me a year to become undetectable and that happened while I was sleeping on a friend’s couch.

I walk past Hibernia Beach, a name that’s not so familiar to a lot of people my age but is known to most as Bank of America Plaza on 18th and Castro and I know 4 or 5 of the 8 or so people memorialized there right now. I’ve attended three memorial events in the last month or so.

It’s a small taste of what it must have been like in the 80’s here and it tastes so vile. But it has a different rancid flavor now. It tastes more of people who have asked for help from EVERYWHERE and found it NOWHERE. It tastes more of generational traumas, health inequities, poverty, overdoses, and housing insecurity. And if all of those things seem like they don’t have anything to do with one another then you’re not talking to people living with HIV or AIDS.

Service providers know that housing is critical to supporting people living with HIV and to ending the epidemic. While viral suppression is at 72% amongst people in SF living with HIV, it is a mere 27% among those experiencing homelessness. So certainly, we need housing for our community’s most vulnerable members to help them stabilize, but my experience indicates it’s not the sole remedy. At ALRP we have too many clients who have weathered 2, 3, 4 evictions.

Getting people from transitional housing into permanent housing can be a Sisyphean task when a client is too disabled to manage everything on their own but too independent to be institutionalized. When we inquire, one service provider recently stated, “I tell you – the services aren’t there.”

Subsidies are amazing, they are critical, in fact – and we need more of them but they too can be jeopardized and weaponized in an eviction proceeding.

Providing housing alone to someone who needs help doesn’t solve the problem. Needing housing and needing help are two different things and without addressing both, then the resources that we throw at housing will be wasted.

Without supporting our community’s most vulnerable members, we can’t get to zero.

So I’m going to hang onto this hanky. And I know it will fade more before we solve these problems but I am truly grateful to be here today with others that care and others in pain and I want to extend a very personal Thank You to those souls that gave their lives to the cause, their blood to endless medication trials, and their hearts to the community. I want to say that I see you and I’m here to continue the fight.”