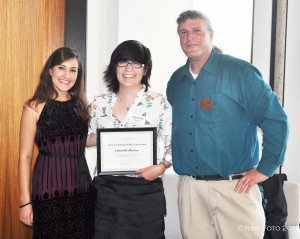 Until recently, Danielle Barnes was volunteering seven days a week for HIV causes, splitting her time between ALRP and an HIV counseling position—and somehow managing to get in some time at a retail job to pay the rent.

Danielle arrived in San Francisco in 2011 immediately after graduating from Whitman College with a bachelor’s degree in gender studies and a minor in anthropology. She came with a desire to make a difference in the HIV community while figuring out the next step of her career and educational plans. When she walked into ALRP’s office expressing an interest in volunteering, it was clear that she had a deep commitment to HIV work and that she was willing to help in any way that she could.

“I wanted to learn about how the city has responded to the epidemic,” she said. “At Whitman I was a leader in the LGBTQ community and I was always interested in health care—I just wasn’t sure what type of health care. I had started as a chemistry major, because I wanted to be a doctor and to work on a cure for HIV. Most of my friends were gay men, and a friend of our family had been HIV+ since before I was born. HIV became associated with all my LGBTQ activism. But I left chemistry when I found I was more interested in the study of human behavior and how we interact with society and social norms. That just fascinated me.”

Danielle wanted to explore whether grad school or an immediate career would be best for her. “I was interested in policy and legal issues, but also in direct health care,” she said. When she arrived in San Francisco, she began volunteering as an HIV counselor, and then connected with ALRP, where she has spent two years becoming a mainstay of the agency. She has worked at community events, handled administrative duties such as support on grant reports, and conducted client intake interviews. Danielle often recruited her own friends to volunteer on behalf of ALRP at community events such as the Folsom Street Fair, and she saved the day at last year’s Annual Reception by managing the live auction. Her stellar work as an ALRP volunteer led to her recognition as 2013 Volunteer of the Year at the ALRP Volunteer Appreciation Party in April of 2013.

She also made time to apply to graduate school. In Fall 2013, Danielle will begin attending Columbia University to earn her master’s degree in public health in a program that will allow her to take on a dual track in either social work or psychology. “I think after I earn my degree I might want to become a therapist,” she said. “I’ve realized through my work as an HIV counselor that there are personal limits to how long I can do that kind of work, or case management work. But I think I’d really enjoy being a therapist and my friends tell me I have ‘that face,’ so I may go in that direction.”

Danielle has found her time with ALRP to be truly inspiring. “Sometimes working in the HIV/AIDS field, or even in nonprofits in general, can be really disillusioning,” she said. “But ALRP is one of those organizations where I never feel that way. Talking to the staff over lunch, despite all their hard work, I’d never hear anyone say, ‘I can’t do this anymore, it’s too hard or too sad.’ Even when people would get upset about a client’s situation, it was clear that this was worth fighting for. They’ve given me the strength to know I should keep going in the direction I am going because it’s worth it. As a group of people, I don’t think you could find a better group of people, people who care more deeply and are more inspiring, than the people at ALRP.”