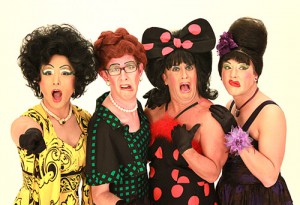 Several ALRP friends and family attended ALRP Night with The Kinsey Sicks on August 2nd in the Rrazz Room of the Hotel Nikko in San Francisco.

The Kinsey Sicks were performing in their new GreatesTits show. A portion of the proceeds are benefiting ALRP’s legal programs. As always with The Kinsey Sicks, a great time was had by all!

In case you don’t know them…The Kinsey Sicks tout themselves as America’s Favorite Dragapella Beautyshop Quartet, one of whom – Irwin Keller – is a former ALRP executive director. Spawned in San Francisco 17 years ago, they combine rich, four-part harmony, biting satire and over-the-top drag – and have performed in 41 states, Mexico, Canada, Australia and Europe.

RELIEVED: “Knowing how to handle an estate without probate is a big load off my mind.”