Facing the Future Together (Summer 2010) 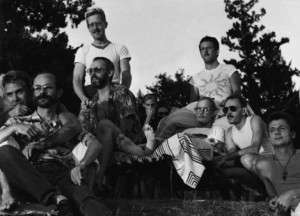 Image from the Film “We Were Here: Voices From the AIDS Years in San Francisco”

There was a heartfelt documentary shown at the Frameline Film Festival this year called We Were Here that chronicled the early years of the AIDS epidemic in San Francisco. As is often the case waiting in line at the Festival, I ran into many friends, including many ALRP supporters.  During the film a large part of the crowd was openly weeping, and the standing ovation at the end was a rousing collective cheer for the filmmaker and subjects, as well as for all of us in attendance. We were there. We lived through those scary times.  We cared for our friends and lovers as we fought for treatments and against discrimination.

As the film made clear, the story of AIDS in San Francisco is not over yet. While it is true that not as many people are dying of AIDS, the sad truth is that more people are living with HIV/AIDS than ever before and we still don’t have a cure. In fact, we have new challenges confronting us all the time.  For instance, I learned recently through ALRP’s involvement in a workgroup on Aging and HIV that by 2012 over half of all people living with HIV will be over 50 years old. On one level this is great news. But how do we ensure that older people living with HIV/AIDS have the necessary legal assistance to navigate increasingly complex systems to secure and maintain income and healthcare benefits?

While the legal needs of our clients have changed greatly over time, and they are changing still, ALRP has remained a constant in the exemplary model of care for people with HIV/AIDS that San Francisco built in those early years and has sustained to this day. And like at the end of a movie, until the need for our services fades into the sunset – we’re still here…